Freedom15 Question of the Day 12/31/15 - How does the buffer tube and takedown pins hold up on the Freedom15 AR15 Lower Receiver?

"I've been reading some stuff about the polymer lowers. How does the buffer tube hold up when putting on the stock? A gunsmith told me the ones he's seen tend to twist and not get tight. Also on the takedown pins he said that after shooting a few hundred rounds they get loose. Have you had any experience with this or has your company figured out a way to counteract those problems that other companies have had?"

"Great questions, we have increased the buffer tube thread/support area by over 30% vs the stock AR. Also we have added additional strength by adding more material in the rear of the receiver. We have had ZERO issues with placing the weapons directly on their butt-stocks.

We have had ZERO issues with our takedown pins even after firing more than TWO-THOUSAND rounds in a single afternoon. We have been field tested the Freedom15 lower for the past two years. We won't sell or release junk, it is our opinion this product is far superior to any other composite piece."

The weapon below was built with a Freedom15 AR15 Lower Receiver has been through multiple 8+hour 165F Heat Test Cycles and 480 round firing tests.

After the test cycles were complete, this same weapon has been fired an additional 3000+ rounds (we have honestly lost count) without an incident or an issue with either the butt-stock or the takedown pins. 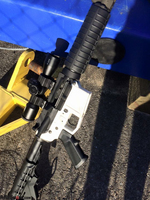